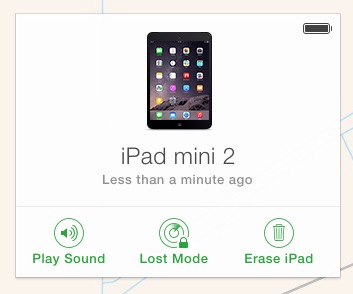 Before I elaborate on how to use these features, let me start by providing you with instructions for enabling Find My on your iPhone or iPad and enabling iCloud Backup.

Now, how can these features be used and how did my client get his iPad back?

I asked him if he backed up his iPad to iCloud. He wasn’t sure. It’s important to know how to determine if and when your iPhone or iPad has been backed up, so please follow along on your own device with the following procedure.

I connected remotely to my client’s Mac to check the status of his iPad’s backup. I opened System Preferences and clicked on iCloud (renamed to AppleID in macOS 10.15 Catalina and newer). Then, I clicked on Manage, and then Backups. There the dates of the most recent backup of his iPhone and iPad appeared. His iPad had been backed up a handful of hours before it was stolen from his car. This was a relief. This meant that we could erase his iPad (using the Find My feature) and restore everything to his iPad, if he ever got hold of his iPad again. If not, everything could be restored to a new iPad.

We also signed into his AppleID account at www.icloud.com to see if the Find My feature was enabled on his iPad. It was. We used both the Lock and Erase functions to try to lock the iPad. These features only work if the iPad is connected to the Internet. The Lock feature prevents further use of the iPad. It locks the iPad’s screen and requires one to enter a code to unlock the iPad. The Erase function erases all personal data and apps installed by my client on the iPad.

Additionally, my client used the Find My feature to obtain the physical location of his iPad. He contacted the police and gave them this information. I’ve often read that the police won’t do anything even with this information. However, in this case, the police approached the residence and knocked on the door. Reportedly, they stated that they knew that a stolen iPad was inside the home. Furthermore, they asked the occupants to give the iPad to them. Otherwise, the Police indicated they would obtain a search warrant and then would return to search the entire home (presumably to look for additional stolen items). Interestingly, the occupants handed my client’s iPad to the Police.

After a while, my client was able to pick up his iPad from the police. After charging the battery and turning it on, my client was prompted to enter his code to unlock the iPad since he had locked it. The iPad had been reset to factory defaults so the erase had worked as well. My client was then able to follow Apple’s instructions to restore the most recent backup of his iPad stored in iCloud onto his iPad.

This story had a happy ending, but most thefts don’t end up with the device being returned to the owner. So, please make sure you protect your iPhone or iPad by enabling the Find My and iCloud backup features. Also, please enable the passcode feature on your iPhone or iPad. This will prevent your device from being used in the first place.