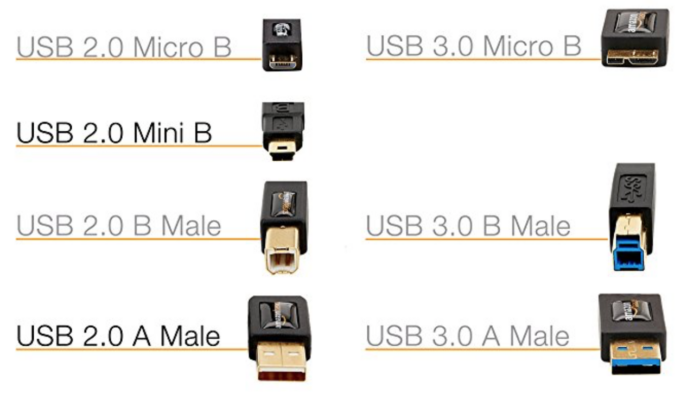 Are you confused by the assorted USB cables that you’ve accumulated over the years? Do you need to be able to name or identify the type of connector you have on one end of your USB cable? The image above shows most of the USB connectors that have been used since USB debuted around 1998.

USB connectors have been confusing for the past 20 years, but perhaps the following context will help to remove some of the confusion. The USB standard was developed by a group of companies in the mid-1990s. The goal was to make it easier to connect external devices to computers and replace the plethora of connectors that had been common. Apple’s iMac, released in 1998, was the first mainstream computer that had USB ports built-in. The iMac used USB version 1.1. Over the years, newer versions such as USB 2.0, USB 3.0 and USB 4.0 have been developed. Along with the new standards or versions came new connectors.

An important fundamental detail to know about USB 1.1, USB 2.0 and USB 3.0 is that there are two different connectors, what we call USB A and USB B. The A end of the cable connects to your Mac. The B end of the cable connects to a device such as an external hard drive or a printer. It gets confusing because there are multiple USB A and multiple USB B connectors.

Let’s briefly talk about the USB A connector. Check out the pictures of the USB 2.0 A Male and USB 3.0 A Male in the image above. The USB 1.1 and USB 2.0 standards used the same USB A connector but USB 3.0 introduce a small change. This subtle difference is that the plastic piece in the middle is blue in the 3.0 version and white in the USB 2.0 and 1.1 version. This is, by far, the most common USB connector that people see. This connector is what most people think of when they think of a USB connector.

Around 2016, Apple started to put a new type of USB port on its Macs. It’s called a USB-C port. The image below shows both a USB-C port on the side of a Mac and a USB-C cable to the left. USB-C introduces a new connector. It has a slightly different size and shape than any of its predecessors, and it’s the first USB connector that can be inserted in any orientation. In other words, there isn’t a right-side-up or an upside-down.

If you need more details about identifying your USB cables, learning about the various data transfer speeds or electrical delivery capabilities, please check out these excellent articles from Consolidated Electronic Wire and Cable and Houk Consulting as well as this YouTube video from ExplainingComputers.